In case you missed out on the news, we're changing artists here at Not Invented Here. While Jeff, the new guy, comes up to speed, we're running some classic strips. We plan to be back in mid-January with all-new, weirdly different looking strips!

Happy New Year! This week and next we're running some greatest hits while our new artist Jeff Zugale builds up a buffer of strips. Meanwhile, as promised, here are some glimpses into the new look of Not Invented Here.

Jeff and I had a short FaceTime session back in November, discussing the possibility of his taking over as artist. About ten seconds later he sent me four pages of rapidly evolving character designs, each better than the one before. By the time I reached the last one I knew that Jeff really "got" our characters and had more than enough skill for the job. We're going to show you one page a day, and by the end I think you will reach the same conclusion.

I'm not sure what the months on the left are, but I presume they are a timeline that starts with that first conversation and ends with him quitting in a rage because I'm so difficult to work with. You can't say he didn't walk into this with his eyes open. 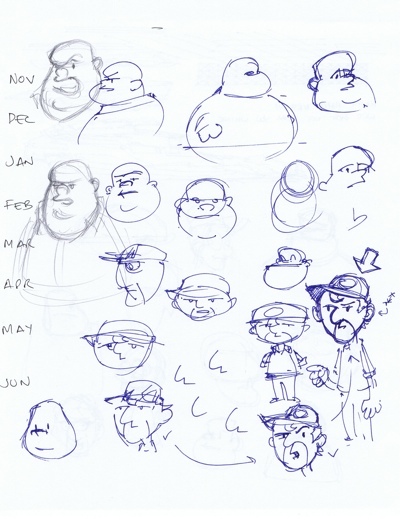