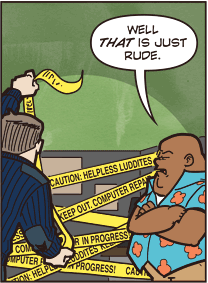 There's just a little over a week left in our IT Barrier Tape Kickstarter, and we are just a few hundred dollars shy of reaching $10,000, at which point extra goodies kick in. I won't lie, we're all pretty excited. If you've been meaning to pledge, this is the time to do it.

This weekend at Emerald City Comic Con, Jeff and I talked with hundreds of Not Invented Here fans, which was awesome. But a surprising number hadn't heard of the Kickstarter (and many of them were very interested), so apparently we have failed to get the word out sufficiently. Will you help by tweeting/blogging/Facebooking/telling your friends and coworkers? Only you can help cordon off IT crime scenes.